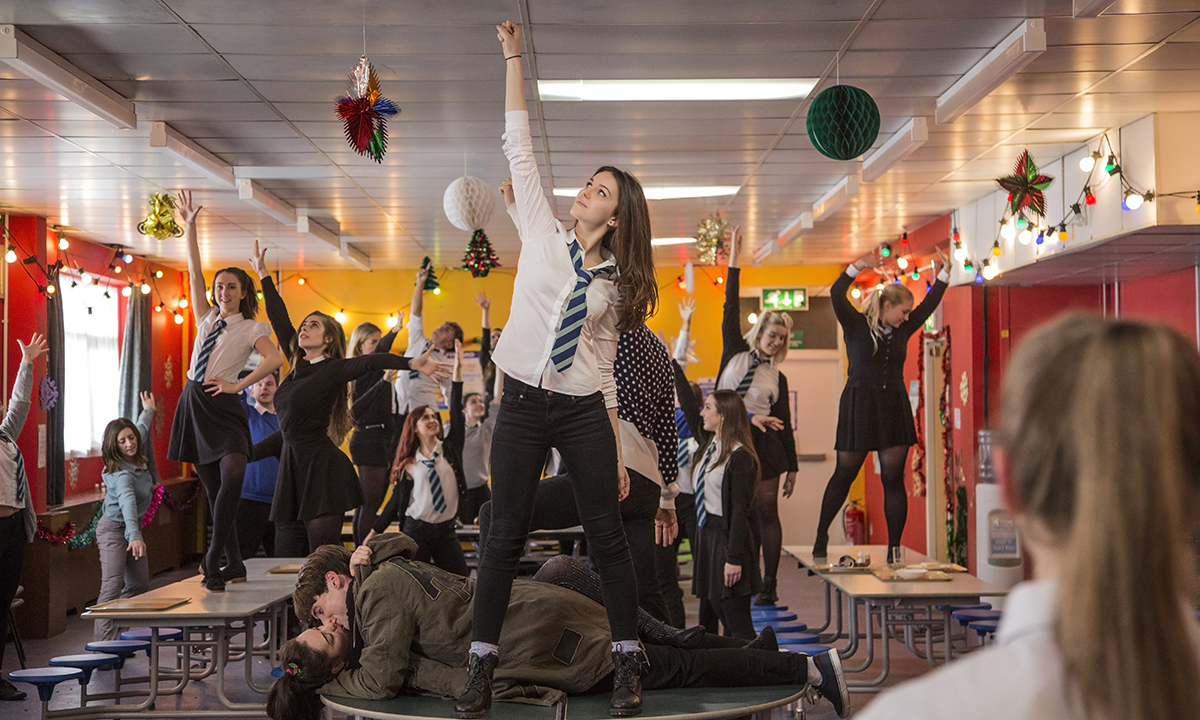 “Anna and the Apocalypse” is an indie film (directed by John McPhail) out of the UK that promotes itself as a zombie comedy musical.  Yes, musical.  Available now in the USA via popular digital platforms, the movie centers around teenager Anna (Ella Hunt) and her small circle of friends as they prepare for the various Christmas festivities at their school when a zombie apocalypse breaks out in their normally quiet little town.  The group fights their way around town in an attempt to reunite with family members and loved ones, and hopefully find a way out of the undead mess.

While the movie certainly has its funny moments, it also falls into some familiar movie tropes.  As an example, when our group of friends is thinking they’ve found some relative safety, hear a strange noise, they investigate.  The noise turns out to be nothing, but of course as soon as they feel relieved the zombies attack.  Another example is the zombification process. As is usual for zombie films, bites from a zombie will turn you into a zombie.  How fast this happens in the film, however, depends on how important the character is to the plot.  Background characters turn almost instantly, whereas those with speaking roles tend to get to say goodbye to everyone and distance themselves from the living before anything goes bad.

The characters do, of course, break out into song on occasion.  Like most musicals, there are a couple of catchy tunes (“Hollywood Ending” in particular), some expository songs (such as “Human Voice”), and the rest just not that memorable.  There are 13 tracks total, most within two to four minutes long (according to the listing on iTunes).  The soundtrack is available digitally, or on Vinyl or CD.

But is it good?  It is entertaining, and surely there are worse ways to spend roughly an hour and a half.  The cast is likable, and do well acting as well as singing.  An individual’s sense of humor determines of course which jokes land and which don’t, but as I already mentioned, I did find parts funny, so it succeeded for me on that level.  For its horror side, the zombies look good, and are quite squishy (gore galore) as they get hacked, slashed, and smashed around.  Overall, though, it’s a lot of what we’ve seen before, in a unique package with added songs.  I could see myself wanting to share its quirkiness with others, and thus watching it again with friends.